Anyone who likes  Scuba Diving Travel should download a dive travel guide. These guides are the best dive travel guides on the market.  Dive Travel Guides are eBooks or digital versions of print guidebooks. These comprehensive eBooks will provide everything you need to  research a destination, plan your trip and give you lots of information about the destination. These days, virtually everyone travels with some sort of electronic device. These eBooks work well on laptops, tablets and smart phones, as well as on  desk top computers. If you want the perfect travel companion for your scuba vacation, take along one of our dive travel guides.

1. There are many benefits to our ebooks.

You can review highlights of a dive just before you enter the water. If you want a suggestion for a great restaurant just before dinner time type “restaurant” in the search feature. To find suggestions for other activities, look up other things you can do. These eBooks contain an extraordinary amount of content; much more than the traditional print guidebooks. Not only do these guides provide detailed information on the most popular dive sites, but also feature chapters on Marine Life, above water activities, and many other topics.

Upon downloading an eBook to your device, you don’t need to have an Internet connection to use the information in the book. Most features in the  guides can be accessed without internet connection. If you want to  look up a specific topic,  use the electronic Table of Contents or  digital search tools.  To record memorable encounters or specific  highlights from your trip,  just add  your own notes to  the text. This literally turns the dive travel guide into a dive log. To get a better look at the pictures or embedded video, just double tap on the screen. This   instantly increases the size of the images or embedded video to  full screen on the device.  Our Dive  Guides are less expensive than  print books, and offer much more.

When you do have an Internet connection, the eBook gives you the ability to utilize social media to share your comments and notes with others. You can also use  the live links contained in the book to access the rest of the features, for instance you can find more information or locate related web pages.

Finally, for several consecutive years, our guides have received prestigious awards in international Media competitions. sponsored. Most recently our guide, Dive and Travel Galapagos, was named the top Travel Guide published in 2017  by the North American Travel Journalists Association. Dive the Bay Islands of Honduras earned a Gold Medal in the eLit Awards competition. Download one of our award-winning  guides today and let us know what you think.

The Dive Travel Guides can be downloaded from iTunes, Google Play and Amazon. There are  several excellent eBooks for you to take with you on the next dive trip. Check out any of the following eBooks:

For those in the diving community who haven’t been paying attention, George Town Harbor and the surrounding area is currently the focus of a huge controversy regarding construction of a proposed cruise ship berthing facility (cruise ship pier) in Grand Cayman. The reasons given by the proponents of the plan seem to include peer envy and greed. Some politicians have stated that other Caribbean Islands, such as Cozumel, have cruise ship piers, so Cayman needs one in order to “keep up with the Jones’s.” Others contend that a cruise ship pier will bring more cruise ship passenger dollars to the island. 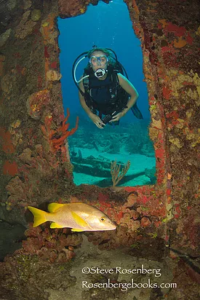 The realty is that Cayman’s economy was built in large part upon tourism. One of the main attractions that Grand Cayman provides cruise ship visitors has historically been the warm clear water and the shallow reefs in and around George Town Harbor. Tourists have flocked to Cayman to dive, snorkel and participate in a myriad of water sports and other activities resulting from this natural resource.

If the cruise pier is constructed, the dredging and resulting silt plume will directly or indirectly devastate the shallow reef system from just north of the Lobster Pot Dive Center south to the near shore reefs along South Church Street. The extraordinary dive sites in this area include Soto’s Reef (Cheeseburger Reef), the Wreck of the Cali, Eden Rock, Devil’s Grotto, the Wreck of the Balboa and other reefs lying in and around George Town Harbor. The Wreck of the Balboa lies directly within the construction zone and these other reefs are located adjacent to the dredge pit. The silt resulting from the construction, the ongoing dredging and the constant bombardment of silt generated by the Cruise Ships’ prop wash will result in the corals and sponges being suffocated and destroyed, leaving behind a dead and lifeless reef system. Unlike other areas in the Caribbean such as Cozumel, George Town Harbor has no current, so there is no natural way to clear the cloud of silt from the area.

If this development is allowed to happen there will be no possibility of recovery. These amazing reefs, which are home to one of the largest aggregations of dwarf herring (Silversides) found anywhere in the Caribbean, will be destroyed. The incredible profusion of corals and sponges will disappear. The reality is that future generations will never be able to experience the incredible beauty of these historic and extraordinary dives sites. 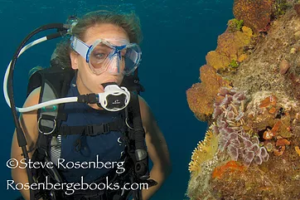 DEMA, the Dive Equipment and Marketing Association, has also recently weighed in with its opinion that “the construction and operation of this facility will be devastating to the natural coral reefs.” This is based in part on the Environmental Impact Statement commissioned by the Cayman Department of Environment, which found that severe damage would occur due to direct dredging action, turbidity and siltation on the shallow living reefs in and around the Georgetown during construction and additional damage would likely be caused by the on-going dredging required to maintain the berthing facility. It should also be noted that the economic data presented in the Environmental Statement, showed that the Proponent’s argument that ‘the construction of a cruise ship pier would result in an economic benefit to the Cayman Islands” appears to be questionable at best.

The proposal for the pier as presented, necessitated costs in the form of millions of dollars to re-locate a shipwreck (the Balboa) and portions of the living reef in the immediate area of the construction. The economic data as presented also pointed out that tourists arriving by air to the Cayman Islands (rather than cruise ship) account for 77% of the tourist revenue generated on the island. Given that fact, it appears to make little economic sense to destroy the very fabric of Grand Cayman’s attraction to tourists (the shallow living reefs), to accommodate a greater number of cruise ships ferrying tourists who, according the Environmental Statement, spend an average of less than $CI 100 per person on island. Furthermore, it appears likely that if the project goes ahead, the number of stay over tourists would actually decrease over the long run. 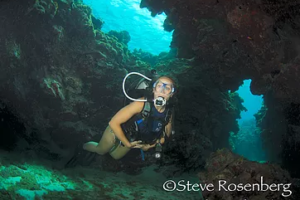 It appears that the decision of whether or not to build the cruise ship pier will be a cabinet decision, so all of the legislative assembly members and ministers in the Cayman Government will vote. It should be noted that the daily administration of the islands is conducted by this Cabinet.

A new grass roots group says it will take the fight against a cruise berthing facility to the voters if the cabinet moves forward with the plan. This group, savecayman.org, is hoping to force a referendum getting one quarter of the country’s registered voters on board to force a public vote. A referendum would require the approval of approximately 4600 registered voters to make that happen. That number is 25% of the existing registered voters 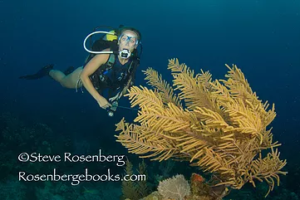 (Caymanian status holders or Caymanians defined as Cayman born w/ Caymanian parents or grandparents) in the Cayman Islands. It would be a difficult task to assemble that amount of support, but such vote would only require a simple majority to reject the proposal. Sources close to the group have indicated that this effort may very well delay the outcome of this issue or perhaps force a compromise solution to be put in play.

The EIA, Environmental Impact Assessment, can be seen in its entirety on the website of the Department of Environment, www.doe.ky. For more information on what you can do, go to the savecayman.org website.