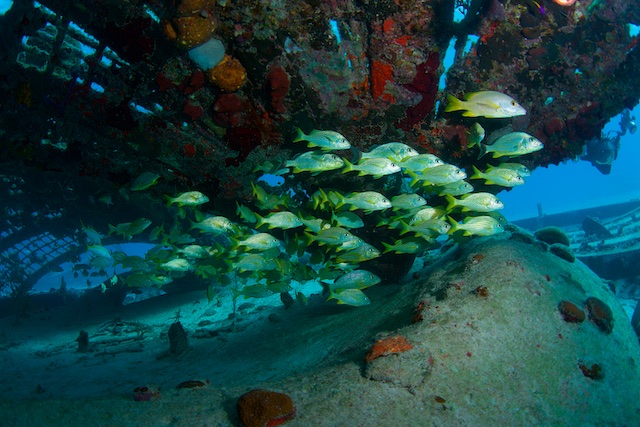 This is our next eBook, which will be released next year. Check out The ThunderDome, a fascinating dive site you can enjoy when Diving in the Turks and Caicos

How often do you get to dive a site that got its name because it used to be the set for a television show. Diving in the Turks and Caicos features a popular dive site called “ThunderDome” that was once part of a French TV Show. The site is located in the Northwest Point Marine National Park, off the west end of Providenciales.

This Dive Site started as part of a TV Show. The ThunderDome, also called the “Dome,” is in the shallows, on the shore side of the vertical wall. The main feature of this site is the “ThunderDome,” which was originally constructed as the focal point of a French television game show called “Le Tresor de Pago Pago” or The Treasure of Pago Pago. This show was filmed in the Turks and Caicos Islands in 1992 and was Broadcast on French TV in 1993 and 1994.

The show was based upon a  story about a small fishing village named Pago Pago that for hundreds of years was supposed to have guarded an underwater temple, which contained a fountain that spit out pearls. According to the story, the underwater fountain was protected by mermaids. The setting of the show was  “supposedly” in the South Pacific; but it was actually filmed in the  Turks and Caicos Islands. 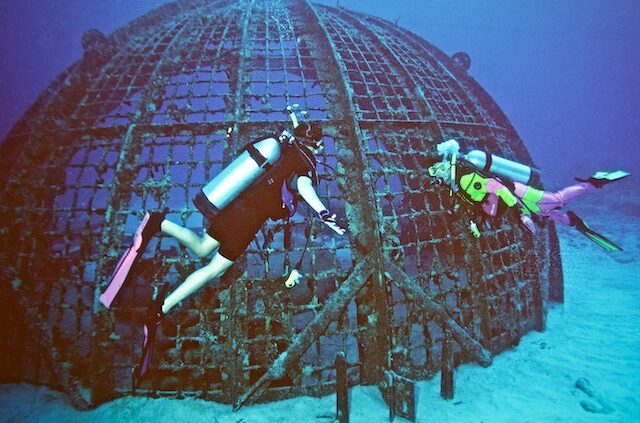 The Dome was constructed as the site of the Magic Fountain.   When it was  constructed in the Turks and Caicos Islands, the top of the original dome was at a depth of about 15 feet and the base of the dome sat on a flat sandy bottom in about 30 to 35 feet of water. On the TV show, contestants had to free dive through a rectangular opening in the top of the dome and gather pearls that were scattered about inside the dome. The ‘pearls’ were projected into the water by a man-made, metal stove pipe sponge in the center of the dome. During the course of each contest segment, the contestants would grab as many pearls as possible while holding their breath.

Free Diving for Pearls. When  contestants ran out of air, they would look for one of five mermaids, who were positioned near the windows built into the outside perimeter of the dome. The mermaids were equipped with scuba tanks and an octopus regulator. The contestants would trade a pearl for air from the octopus, and then continue to try to gather more pearls. If a contestant asked the wrong mermaid for air, he or she would receive only a single breath and the contestant would have to swim like mad for the surface.

The show was canceled after several contestants suffered air embolisms or similar DCS medical issues and had to receive treatment at the local recompression chamber to recover. The contestants that successfully made it back to the surface received 250 Francs for each pearl they were able to collect. 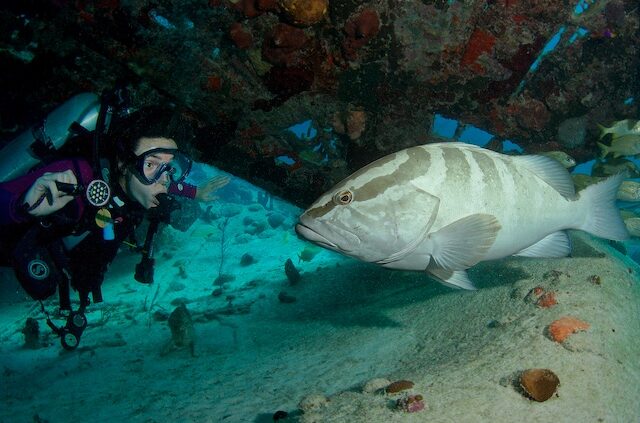 A dive encounters a large Nassau Grouper under a section of the ThunderDome. ©Steve Rosenberg

Underwater Photo and Video Oportunities. The dome itself was originally a large, heavy, steel-mesh dome-shaped structure, with a circular base. The ThunderDome collapsed during hurricane Francis in 2004.  Today there are several pieces of the dome scattered about the bottom. This site offers endless photo and video opportunities.  The surfaces of the many broken sections of the Dome are covered with sponges, encrusting corals, and a variety of tube worms and blennies. Beneath one section of the dome, the man-made stove-pipe sponge that used to spit out pearls lies on its side, giving shelter to spotted eels, banded shrimp and a variety of other invertebrates. In various protected areas beneath the pieces of wreckage, divers will encounter schools of grunts, goatfish, schoolmasters and snapper that take refuge there. There are a lot of friendly tropical fish, including angelfish, Nassau grouper, graysby and squirrelfish that wander in and out of the protected areas of The Dome.

A spotted moray eel emerges from the stove pipe sponge at the ThunderDome. ©Steve Rosenberg

The entire back reef area near the Dome is made up of a series of low-profile spur-and-groove coral ridges with sand channels. 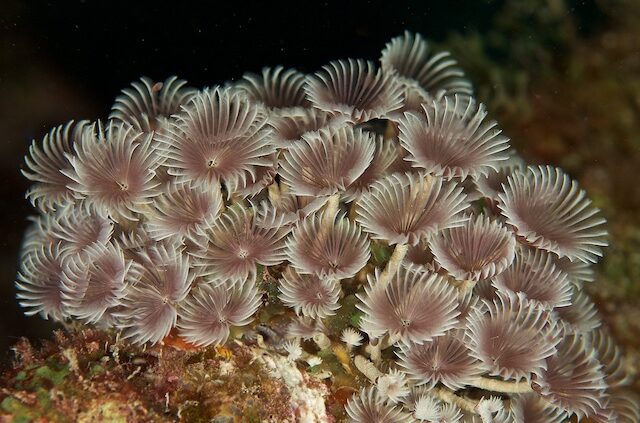 Social Featherdusters can be found on the ThunderDome at night. ©Steve Rosenberg

ThunderDome offers many options for photographers and videographers. Photographs and video of fish, divers with marine life inside pieces of the wreckage, and of course, close-up and macro subjects are among the many favorites. It should be noted that it is futile to look for any pearls that were left behind. The mermaids took them all when they left, as payment for their assistance to the contestants and missed wages. This is just one of many Dive Sites to visit while diving in the Turks and Caicos Islands.

New eBook Guide. Look for the new eBook dive guide, Dive and Travel Turks and Caicos Islands, which will be released in the Fall of 2022.

Cozumel is pretty much back to normal and the diving is great! Updated Dec ...