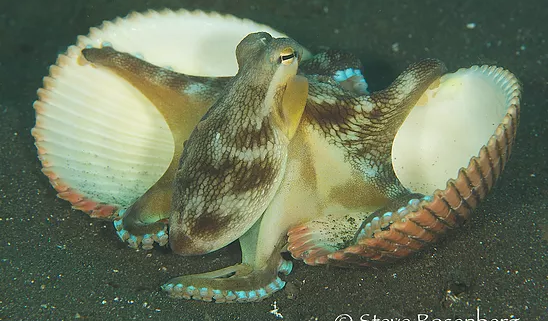 During a recent trip to Lembeh Strait in Indonesia, I happened upon one of the most fascinating marine-life behaviors that I’ve ever observed. Diving along a fairly shallow, barren, sandy slope, I was searching for something really interesting to photograph. My dive buddy was busily taking pictures of porcelain crabs and ghost shrimps going about their daily lives among the tentacles of the occasional carpet anemone. As I scoured the sandy expanse ahead of me, I concentrated on controlling my fin kicks, trying not to lift clouds of fine silt.

Perhaps because there was a scarcity of potential subjects in the expanse of sand, a solitary clamshell drew my attention. The shell, perhaps 3 or 4 inches across, was clean and intact. It struck me as odd that it would be just sitting by itself, out in the open. As I continued to investigate, the shell opened a crack and then quickly closed. I thought then that the shell might contain an eight-legged resident, so I settled in for a closer look. I balanced my camera atop my reef stick, which I had gingerly pressed into the sand to form a makeshift mono-pod. My buddy noticed that I was “on point” and settled in next to me to see what had attracted my attention. 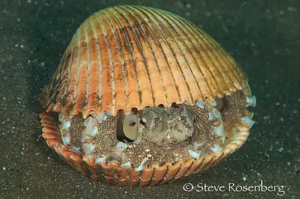 Octopuses will often use discarded objects for shelter. Empty containers, such as bottles, cans and clamshells afford excellent refuge for small octopuses. I’ve found they exhibit a remarkable sense of curiosity, even about intruders many times their size. Move slowly and patiently on your dive, and you will often discover they are as curious about us as we are about them.

In this case, the opening between the halves of the clamshell reappeared in less than a minute, and this time I could see two diminutive eyes staring back at me intently. The top shell continued to open very slowly as the octopus grew braver. At some point, I realized that the cephalopod I was observing might be the highly intelligent coconut octopus, Amphioctopus marginatus, which I have heard so much about.

In some respects the coconut octopus is like any other octopus. It is normally found on sandy bottoms in bays or lagoons. It has four pairs of arms covered with suckers, two eyes and an uncanny ability to make itself invisible from potential predators. The main body of this octopus is smallish, typically around 3 inches in size, and has arms approximately 6 inches long. The coconut octopus displays a fairly typical color pattern with dark branching lines similar to veins, and usually displays a yellow siphon.

Marine biologists coined the name “coconut octopus” after observing the animals excavating coconut half shells from the ocean floor and carrying them for use as portable shelters — the first documented example of invertebrates using tools and carrying objects for future use. Although octopuses often use foreign objects as shelter, the sophisticated planning ahead of coconut octopuses, in selecting materials, carrying and then reassembling them, is considered far more complex. In recent studies, researchers have observed the animals carrying those half-shells up to 65 feet across the seafloor, where they reassembled them into a roughly spherical hiding place. Interestingly, while the octopuses are transporting the shells, they receive no protection from them, which is highly unusual behavior. It’s even more difficult to keep from laughing out loud and flooding your mask as you watch an octopus tiptoe awkwardly across the sand carrying its shells, and then reassemble them to create a protective shelter.

As we continued to watch, this particular octopus opened its clamshell a full 180 degrees, until the two halves lay flat on the sand. At this point we could clearly see that the two halves were no longer connected. We watched as the octopus maintained a firm grasp on both halves of the shell as it extended two of its arms out over the edges of the shell and onto the sand. Next, the octopus awkwardly lifted the shells off the bottom and actually stood up on the two arms. As it began shuffling across the sandy floor, it used the two arms for locomotion, sliding one arm at a time in a kind of walking motion. As it moved across the bottom, it used several of its arms to form an unrecognizable mass above the shell, apparently attempting to mask or camouflage its presence.

The octopus continued its navigation across the sand for about twenty feet and then suddenly stopped. It withdrew its “walking” arms and allowed the shell to settle on the sand. We watched with amazement as it deliberately lined up the edges of the shell-halves and pulled its top cover back down as if on a hinge, withdrawing back into the confines of its portable shelter.