The banded Sea Krait, Laticauda colubrina, is a species of sea snake that inhabits coral reefs throughout the Indo-Pacific region. They are usually found off the shore of small islands and they often hide in small crevices or under rocks. They are generally nocturnal hunters, but they are often found out during the day.

Banded sea kraits are also called yellow-lipped sea kraits because of a characteristic yellow upper lip. Their heads are mostly black with a yellow band extending along the lip, underneath each eye. Their tails have a U-shaped yellow marking along the edge that borders a broad black band. They have a smooth, scaled body with a blue or gray base color. Twenty to sixty-five black bands form rings around the body. They frequently reach lengths of 1.5 meters or more. 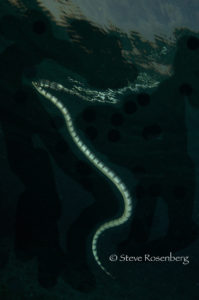 They spend much of their lives in the ocean, but also spend a great deal of time on rocky islets in order to court, mate, lay eggs, digest food, and shed their skins. They are air breathers, but they have many special adaptations for diving including a saccular lung allowing them to dive to depths up to 60 m in search of food. 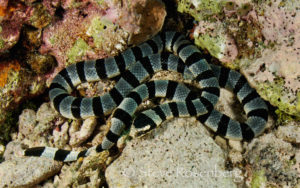 Sea kraits are oviparous and return to land to lay their eggs. They also digest their food on land, and they can actually climb trees. However, they hunt and catch prey in the ocean. They reportedly feed primarily on smaller eels that inhabit shallow water. The females are typically larger than the males and feed on larger species of eels that inhabit deeper water to eels.

DID YOU KNOW THAT female sea kraits rarely show any overt response during the courtship process, however when they are feeling “frisky,” they may signal potential males by waving their tails when they are ready to copulate. 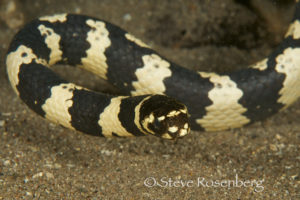