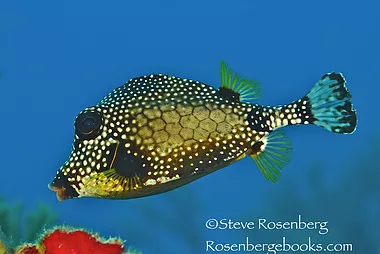 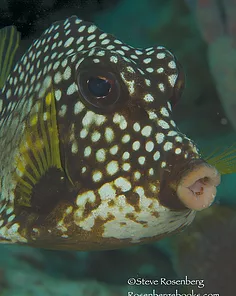 here are a number of very interesting fishes in the Caribbean. One of my favorites is certainly the Smooth Trunkfish, Rhimesomus triqueter, a member of the family of fishes called boxfish. These slow-moving reef fish can be one of the most entertaining fish to watch on a dive. They are easily recognizable by their shape, coloration and their unique means of propulsion. 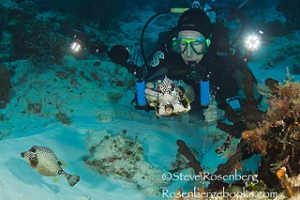 They have short triangular bodies enclosed in a boney covering, which has the appearance of stretched canvass. When viewed from the front, the body is triangular in shape with a wide base and a narrow pointed top. Only the jaw, bases of the fins and the tail protrude from this carapace, and the locomotion of these fish is unusual if not peculiar. The dorsal and anal fins propel the fish with a rotary motion, while the tail acts as a rudder. The ventral fins move continually, forcing air through the narrow, constricted gill openings. They have a pointed snout with bulging lips encircling its small mouth. 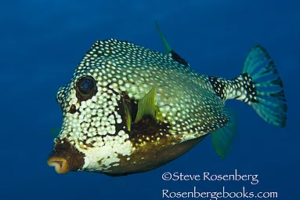 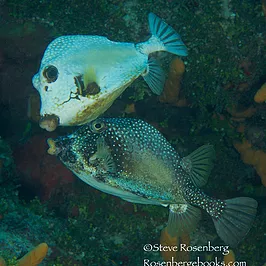 They appear clumsy or sluggish at first, but if you try to approach them too quickly, you will be surprised at how fast they can accelerate using their tails. They normally frequent shallow water, in sandy or strip reef areas. They don’t seem to mind the presence of divers, especially if you hang around, keeping your movements to a minimum. When you observe them for a while, they take on an almost coquettish personality, displaying a bashful, timid side and yet curious and carefree at other times. 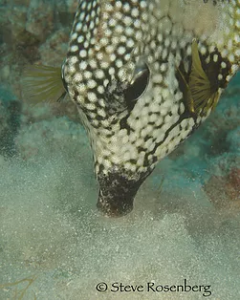 Its normal adult size is about 7 to 8 inches in length, although it can get much larger. The smooth trunkfish is normally solitary but sometimes moves around in small groups. In fact, the male trunkfish is thought to have a harem of females in its large territory. I was recently lucky enough to observe some very interesting mating displays within such a group, including dramatic color changes. The scientific names Lactophrys triqueter and Rhimesomus triqueter are synonymous.

I often find myself watching in amazement as they blow water at the sand in an attempt to uncover food. It uses its protruding lips to expel a jet of water, to prey items such as which disturbs the sandy seabed and reveals any shallowly buried benthic invertebrates, such as tiny mollusks, crustaceans, worms, and sponges.

The (Not So) Terrifying Tiger Shark