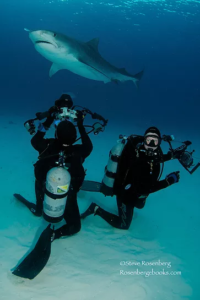 Although tiger sharks, Galeocerdo cuvier, have long been considered dangerous to humans, today there are a growing number of dive operations worldwide that focus on putting divers and the sharks in the water together. While some shark experts assert that these encounters are just an accident waiting to happen, it is interesting to note that despite baiting, close proximity and almost daily interactions over the course of more than 10 years, there have been no reported attacks specifically involving tiger sharks and divers.

Partially to thank for that record are reputable dive operations that set up strict guidelines for these interactions, and which require all of their divers to adhere to a strict set of rules. When these big predators show up, divers are required to continuously track them, maintain eye contact and point them out to the rest of the group.

Up-close, personal encounters have taught me that tiger sharks generally swim slowly and deliberately. When there are bait boxes in the water, other sharks, such as lemons and bulls, will swim directly to the bait. The tigers, however, approach warily, with their noses to the sand as if following a scent like a bloodhound. Ordinarily they don’t immediately compete with the other sharks, instead taking their time to investigate the smell. Despite their sluggish behavior, tiger sharks are very strong swimmers and extremely fast when they want to be. Their high back and dorsal fin can be used as a pivot, allowing them to spin quickly on their axis. This is why dive operations insist that divers maintain eye contact and keep track of the sharks as they pass, especially when they are nearby. 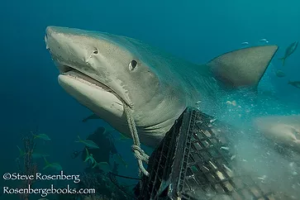 As soon as the tiger figures out that the smell is coming from the bait box, it often becomes focused and determined. I have seen a shark suddenly swim directly to the crate and grab the whole box, or one of the tether ropes, in its mouth and then swim away with its prize in tow.

Formidable looking animals, these sharks are named for the dark, vertical stripes Tiger sharks are also recognizable by their wide, blunt nose. They have very large mouths, with rows of 18 to 26 sharp, serrated teeth. Their powerful jaws allow them to crack open the shells of sea turtles and large clams. 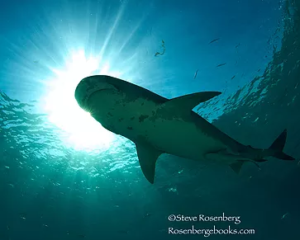 The stomach contents of captured tiger sharks have revealed almost anything you can imagine, including stingrays, sea snakes, seals, birds, squids, and even license plates and old tires. Large specimens can grow to 18 feet or more (5 meters) and weigh more than 1,900 pounds (900 kilograms). Tigers live up to 50 years in the wild. They have small pits on the snout, which hold electro-receptors called the ampullae of Lorenzini. 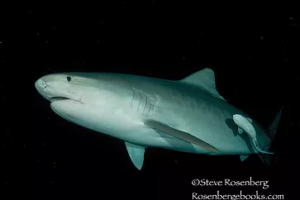 These enable them to detect electric fields, including the weak electrical impulses generated by potential prey. Tiger sharks also have a sensory organ called a lateral line on their flanks that allows them to detect minute vibrations in the water. These adaptations, their excellent eyesight and acute sense of smell make them fearsome nocturnal hunters, able to follow faint traces of blood in the water to their source, even in murky water. The tiger will circle its prey and study it by prodding it with its snout before doing a taste test. This is somewhat reassuring when it is bumping into my camera port. Tigers are not at all shy about coming in close to inspect your cameras and check you out.

Diving with tiger sharks at night is an incredible experience, albeit a daunting one, knowing that tigers had been present on the late afternoon dive. The night dives I have participated in have usually been in relatively shallow water, beginning at dusk to let the dive group form a close line on the bottom. Diving directly under the boat with lights mounted at the surface can add enough ambient light to allow divers to spot the sharks before they just appear in front of you. 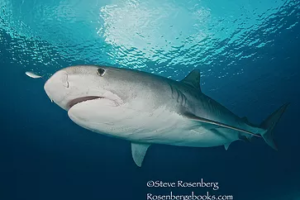 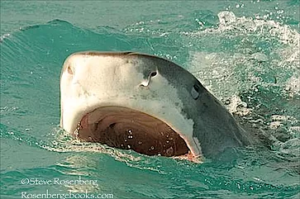 It is thought that tiger sharks bear offspring only every two to three years, usually two at a time. The tiger shark is the only species in its family that is ovoviviparous; its eggs hatch internally and the young are born live when fully developed.

Unfortunately, tiger sharks are considered a Near Threatened species by the International Union for the Conservation of Nature (IUCN) due to excessive finning and fishing. They are still killed by man for sport. Tigers are especially vulnerable because they grow slowly and take many years to mature. They are also hunted for their livers, which contain high levels of vitamin A that is processed into vitamin oil. This beautiful animal, often characterized as a man-eater, faces far more danger from men than it poses.

The Smooth Trunkfish
G-Q5E0503ZQRScroll to top